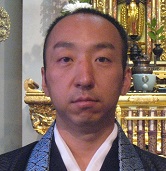 Hoon-ko commemorates the death of the founder of Shin Buddhism, Shinran Shonin. This holiday is observed in early January from the 9th to the 16th. This holiday is among the most important observed in the Jodo Shinshu tradition. The observance began after Shinran’s daughter. Kakushinni carried on administration of Shinran’s mausoleum, as did her descendants, who ultimately became the Monshu of Jodo Shinshu. In the word hōonkō; ‘hōon’ means “return of gratitude” and ‘ko’ means “to clarify the meaning of” or “gathering”‘.

Rinban Katsu Kusunoki will join us on January 31st, via Zoom, for the Service and Dharma Talk on Hoonko. Reverend Katsuya Kusunoki is the Head Minister of the Seattle Betsuin Buddhist Temple. Sensei was born in Nagasaki, Japan, the second son of a temple family. Today his older brother Naoya is the 17th generation of their family to serve their family temple. Sensei is a graduate of Miyazaki University where he majored in primary education and his hobby is to watch and play baseball and softball. While a college student he took a break and spent almost two and a half years in a Japanese volunteer program similar to the Peace Corps in America coaching baseball in Zimbabwe before returning to Japan to complete his studies. After graduating he spent three years teaching 3rd and 6th grade classes before deciding to become a minister.

Sensei’s advanced training includes the Hongwanji-ha Rituals course for leaders (Gonshiki). He is a Hongwanji-ha certified Special Rituals Minister, a certificate only he and our former minister Rev. Sala Sekiya hold within the Buddhist Churches of America. Sensei’s first assignment in America was to the Lodi Buddhist Temple in 2010 and he was transferred to Seattle in April of 2017. Sensei and his wife Ayano have a son, Yuiya, who was born in September 2016. “rev.kusunoki@seattlebetsuin.com”

** Rev. Kusunoki will join us for a Dharma Discussion after the service **

Misc.
« Aiding One Another: A Fundraiser for Jewels Helping Hands